Nepal, officially the Federal Democratic Republic of Nepal, is a landlocked country in South Asia. It is located mainly in the Himalayas but also includes parts of the Indo-Gangetic Plain. With an estimated population of 26.4 million, it is 48th largest country by population and 93rd largest country by area.

Nepal has the most striking feature in the great number of temples and Gods. Wandering around Kathmandu, you will come across a small temple in three steps while another monastery has already appeared in your sight. It's not exaggerated to say that temples in Nepal are as much as its housing residences.

Buildings with a strong religious color is another highlight in Nepal, where tourists can appreciate the medieval city, exquisite carvings, etc. In addition, Nepal also has the wondrous diversity of flora and fauna. Chitwan National Park is a good case in point. It provides a prefect habitat for all kinds of wildlife. Many endangered species like Asia elephant, Indian rhinoceros, Himalayan marmot, etc. are enjoying a happy life here. With a diverse geography, Nepal has risen from the subtropical regions to alpine grasslands and become a great paradise for adventurous mountaineers, explorers and visitors from all over the world.

Where is Nepal located at World Map ?

Nepal is located in between China and India. It runs in the northwest-southeast direction, stretching about 850km from west to east, 200 km from north to south. At the foot of the Himalayas, Nepal is home to eight of the world's ten highest mountains, including Mount Everest, the highest one in the world. 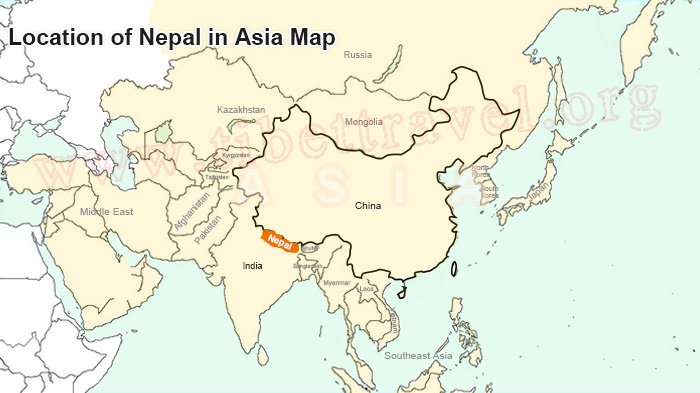